Sponsorship piggybacking, guerrilla advertising, clever deception. Call it what you like, ambush marketing in the world of sports sponsorship is here to stay.

Brands pay millions to sponsor sporting properties, but why? To call themselves the “Official Sponsor of the FIFA World Cup”, or the “Official Soft Drinks Partner of Manchester United in Japan”? To be associated with the positive values, heritage and prestige of such sporting events and brands? To boost public opinion and awareness that ultimately delivers a tangible ROI? There’s no denying that sponsorship can deliver some very real benefits. But they aren’t always limited to the sponsor.

This is thanks to the highly visible if seldom recognised tactic of ambush/guerrilla marketing. For those unfamiliar with the term, it’s essentially where brands who have no official right to associate themselves with a property find a way of circumventing the rules and doing exactly that. Essentially, they ambush another company’s sponsorship with the sort of underhand tactics that would’ve put the Vietcong to shame.

Working on the assumption that most people reading this are not legal professionals or contractual know-it-all’s, it’s worth looking at the sort of regulations these strategies are designed to get around. An obvious place to start are high profile bodies such as the Fédération Internationale de Football Association (FIFA), or, more prominently, the International Olympic Committee (IOC). The IOC, for example, have a set of legislative decrees preventing non-sponsors from associating themselves with any Olympic property (intellectual or tangible) so complex, they’d baffle all but the savviest of lawyers.

The penalties for trying to escape the web of draconian restrictions surrounding the quad-annual sports festival can be severe. So much as a mention of the Olympic name or anything resembling the iconic five rings within a campaign could lead to an almighty uproar and potentially mammoth penalties from the branding police. But brands are getting cleverer, and so is their marketing.

That said, brands exploiting legal loopholes and taking advantage of an event’s widespread popularity is certainly not a new concept. Granted, laws are becoming stricter, but this form of marketing is becoming increasingly prominent in modern sport. So it should be no surprise that this year’s FIFA World Cup in Brazil has been subject to a few ambushes of its own.

Take a look at these marketing campaigns that ran parallel to the FIFA World Cup, during the ad breaks between games, and plastered all across various mediums.

Adidas and Coca-Cola each paid FIFA an estimated $100 million to legally become one of FIFA’s six World Cup “Official Sponsors”, granting them the “exclusive” rights to link themselves to the FIFA World Cup. How much did Nike and Pepsi pay?

The question to be asked is can a casual sports fan distinguish between such campaigns, do they have any idea what’s going on, and, even if they can identify a sponsor from an ambusher, do they care?

Of course, there are different approaches when it comes to ambush marketing, and the lines are blurred between the subtle and sub-conscious. For unashamedly brazen examples that delight in (very nearly) crossing the line, look no further than Paddy Power – the corporate rebels who’ve mastered the art of the ambush to drive awareness through the metaphorical roof. One only needs to think back to their 2012 ‘official sponsorship’ of the biggest sporting event in London for a perfect example. 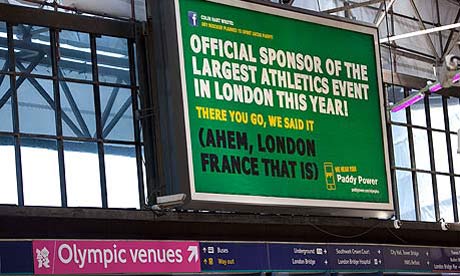 Whilst clearly the campaigns by Nike and Pepsi are of a more subtle variety, the implications are similar, and the benefits of sponsorship are diluted regardless of how much tact goes into an ambush. Ultimately, sponsors need to ask themselves why they are spending vast amounts of money on sponsorship rights without protecting their investment through sufficient activation.

One thing’s for sure – those companies that do decide to sponsor an event, however big or small, need to be sure they don’t go down without a fight. Though it doesn’t have to be costly, activating and promoting sponsorship can help maximise return on investment and minimise the impact of the inevitable pirate fleet of ambush marketers. No amount of rules, red tape or branding police will ever be able to overcome guerrilla marketing completely. While rules may adapt and strengthen, marketers will simply become smarter. The issue is not going away. And that’s why the importance of sponsorship activation, therefore, has never been greater.